Hybrid batteries are built to last a long time, but they don’t last forever and will ultimately shut down and stop working.  The number of miles and years of hybrid ownership are part of the equation, but the ultimate reason is a failed cell in one of the modules that make up your hybrid battery pack.

Depending on your make, model and year, your hybrid battery pack is made-up of somewhere between 20-40 battery modules and each module contains 6 separate battery cells. Each NiMH (nickel-metal hydride) cell has a voltage of 1.2 Volts. 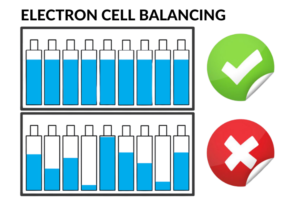 This capacity imbalance will ultimately result in the failure of your hybrid battery pack.  Computer systems in hybrid vehicles are designed to monitor the voltage in each group of modules as they charge and discharge.  The center modules and cells will indicate full and empty very quickly because their capacity is so low, but the better cooled and higher capacity outer modules aren’t doing much in the way of helping.

It’s the perfect scenario for hybrid battery failure and all you have to do is leave your hybrid parked overnight with a low battery charge.  The weakest cell in the weakest module will self-discharge enough in a short period of time to cause polarity reversal.  Polarity reversal will ruin that cell permanently and because the cell is in a connected and sealed module, it renders the entire module as bad.  Using the Toyota Prius as an example, it was designed to operate with six 1.2V cells per module for a total of 7.2 Volts.  The failed cell leaves the module with five 1.2V cells and total of 6.0 Volts.

The Toyota Prius computer system prevents battery use if the voltage difference between the highest and lowest cell in any battery module exceeds 1.2 Volts and in most cases, the entire battery will not work.  When this happens, you should receive a low block voltage trouble code of some type and your intake cooling fan may run on high all the time trying to keep your battery cool in its malfunctioning state.

If you’re concerned about the environment, gas mileage, performance and extending the life of your hybrid vehicle than maximizing your batteries potential should be at the top of your list.  Electron has provided customers with high performance long lasting quality hybrid batteries at affordable prices for over a decade and we’re just getting started.

Thanks to advances in battery technology, consumers have options in today’s hybrid battery replacement marketplace and there is no better or more affordable way to restore the performance, power and fuel economy of your hybrid than with a Brand-New Hybrid Battery, New or Remanufactured Hybrid Battery Rebuild Kit or a Remanufactured Hybrid Battery from Electron.  All of our hybrid battery options are built to a higher standard than dealership replacement batteries, have longer battery warranties and are significantly less expensive than dealership battery replacement.

WHICH HYBRID BATTERY REPLACEMENT OPTION IS RIGHT FOR YOU?

Other things to factor into your decision are the warranty, how long the company has been in business, are the technicians ASE Certified, what types of batteries does the company offer and do they have physical locations with proper testing facilities or are they strictly online stores?

To learn more about our proprietary cutting edge technology and why Electron should be your first choice for new and quality remanufactured hybrid batteries and rebuild kits:  CLICK HERE.

Why pay dealership prices when you can get the same performance & a longer warranty for up to 50% less?

To learn more about our hybrid batteries & rebuild kits, please call or email us today.

Great customer service and waiting lounge. Netflix if you want. Very informative and only with $100 u can find out what’s needed for your car to perform at optimum level. Honest and careful is what you want for your automotive care. Long future ahead of you guys!

Out here in NJ my 2006 Prius’s hybrid battery suddenly kicked the bucket, as they do at 150k miles. With a rebuild kit shipped quickly from Electron, I was back on the road in a few days. Great installation instruction video, and a fun project quite manageable for a do-it-yourselfer.

Highly recommended…….I’m a customer all the way from Guam and they kept in constant contact until I got my kit to rebuild my failing hybrid battery. Very helpful and great customer service.

Thank you so much!